WHEREAS: Throughout our nation’s history, women have served honorably and courageously both on and off the battlefield. Women were first allowed to serve the nation during wartime in limited and traditional gender roles such as nurses, cooks, and other administrative support roles; and

WHEREAS: During World War I, women were allowed to enlist in the Navy as Yeomen (F) and the Marine Corps as Reservists (F) to serve on the home front, filling in for men who were deployed to Europe. The formation of special units in World War II such as the Women Accepted for Volunteer Emergency Service (WAVES), Women’s Army Corps (WACs), Coast Guard Women’s Reserve (SPARs), Women Airforce Service Pilots (WASPs), and the Marine Corps Women’s Reserve (WRs) allowed women to begin serving in positions previously reserved for men; and

WHEREAS: This year marks the 72nd anniversary of the Women’s Armed Services Integration Act that was signed into law by President Harry S. Truman on June 12, 1948. The act acknowledged the great contributions made by women in the military and finally enabled them to serve as regular members of the United States Armed Forces and Reserves in times of both peace and war; and

WHEREAS: Today, women comprise more than 17 percent of the country’s military force, with more than 25,000 women veterans currently residing in the state of Oregon. The number of women veterans continues to increase, as does Oregon’s commitment to promoting awareness of their contributions to our nation’s military history and improved access to their earned benefits; and

WHEREAS: Oregon recognizes and honors the contribution of all women who have served in the United States Armed Forces – past, present and future.

NOW, THEREFORE: I, Kate Brown, Governor of the State of Oregon, hereby proclaim June 12, 2020 to be 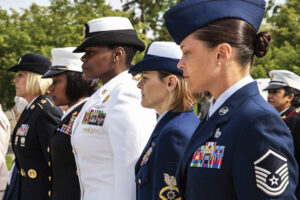